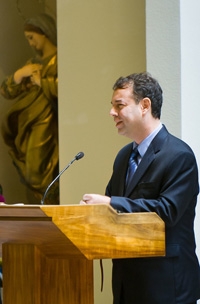 In his Commencement speech to graduates, Bill Marsilii, a highly successful Hollywood screenwriter, urged the graduates to ask God for 'big' things that are in God's best interest and to not settle for mediocrity in their work.

At the outset, Marsilii asked, 'Can I serve God while serving my dark Hollywood masters?' His response: 'Don't be discouraged - it means you're in the midst of a faith walk.'

He urged the graduates to find something beyond their own success, something more important than this script, that meeting, an agent's phone call - keep God and your faith primary. Life is like a really well written movie. You wonder 'Why didn't God cut that part?' Why did God let that happen to me? Years later, you go, 'Oh, that's why that happened.'

He argued that the reason he has this opportunity to talk about God and to share his faith with the graduates is because he achieved a level of material success that the rest of the world sees as important.

He continued, 'Jesus told great stories and that's why he was invited into people's living rooms - just like TV today. He shared tales of faith, God, and redemption. A great story will bring people to you, to hear what you have to say, many of whom will never be caught dead in a church'.

'Creating art that gives glory to God requires your standards to be higher than what passes for Hollywood entertainment, not lesser. God is not served by crappy artwork, my friends. Michelangelo faced the same challenge you're going to face in Hollywood.' He continued, 'Do you think at any point Michelangelo said, 'Well, God knows what is in my heart, it doesn't have to be perfect. My mom's church group will like it.' No! He demanded of himself the absolute best, because he knew God was judging his work. Michelangelo did something, created artwork that people without a shred of religious belief travel from around the world to see and marvel, and they say, 'Wow, maybe I should give this God stuff a shot, because look at that. This man said he was inspired by God and he did this.' Aspire to be like Michelangelo!

In his final charge, he asked the graduates to 'Pray boldly. Pursue your art boldly'.

Senior Address. Matt Connors, a graduating student from Sacramento, chosen by his peers, opined that 'Go therefore and make disciples of all nations' is the single greatest call to arms ever given in human history. It is a command that brings 'fulfillment to life and death.' He asked graduates to 'consider the challenges ahead.' Matt continued, 'Our movies will not change the world, our businesses will not solve world hunger - only God can do these things. But by the fruit of our hands and God's grace, what we do will inspire people to lift up their hands and see God with their hearts.' 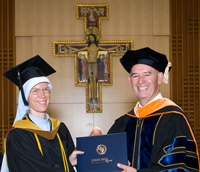 Class Valeditorian was Sister Mary Agnes Dombroski, who is the co-founder of the Daughters of Mary, Mother of Healing Love, a private association of Catholic women, headquartered in Rochester, NH, dedicated to the care and healing of children who have been separated from family, and to the renewal of family life in modern culture.

Graduation Photos. If you want to see more photos of the commencement, click here: http://www.seeyourphotos.net/syp/event-personalize.html and then click on Graduation JPCatholic.