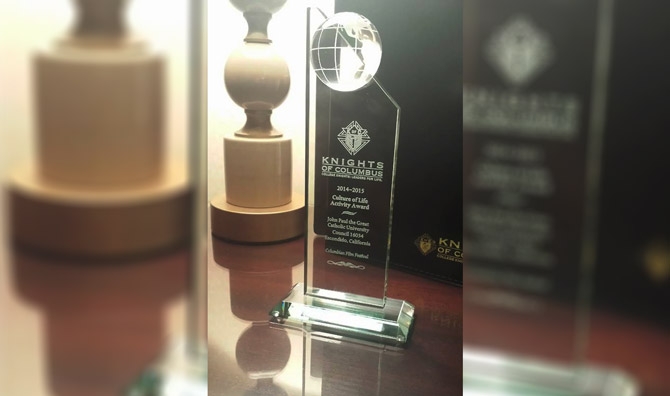 Forty-two years after the 1973 Roe v. Wade decision that legalized abortion in the United States, Knights throughout the country continue to raise funds and march in defense of the most vulnerable among us. In California, however, Council 16034 has found a unique way to utilize their campus’ talents to raise awareness of the cause.

Given that the majority of students at their university are film majors, the council organized and hosted a film festival built around a pro-life theme. In preparation, a six-Knight planning committee was formed, funds were saved and garnered from a local apparel company, and social media and fliers were used to promote the event and encourage participation. In the end, nine films were submitted, of which six were shown and ranked by three guest judges.

Trophies were awarded, and all attendees were invited to a dance social that followed the event. Nearly 50 percent of the campus community attended, and there are plans to make this an annual festival. JPCatholic students Brandon Kalinowski and Ben Moore were present to accept the award at the 2015 College Councils Conference in New Haven, Connecticut. For more information, visit the Columbian Film Festival page at facebook.com/columbianfilmfestival.