A sound stage is used for recording video or sound footage. It’s a large open room that has been sound proofed. “A sound stage is like a blank canvas for your painting,” explains Tom Dunn, Professor of Film Production. “You can create whatever you want.”

The sound stage is a huge asset for the university. Nathan Scoggins, Adjunct Professor of Film, now teaches Directing II to the Media majors there. Professor Scoggins has plenty of room to show students how to set up a scene and where to place the camera. 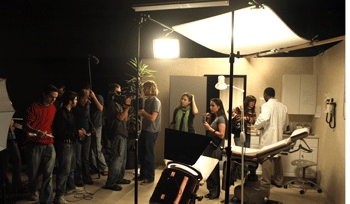 The sound stage gives the students the opportunity to create their own sets instead of having to go out and find locations. “When you go on location, you�re always fighting against something,” Professor Dunn explains. “It’s never big enough for all of your equipment and people. You’re told, ‘You can film here from 3 to 5, but don’t touch anything!’ You’re battling light that’s coming in from a window” The sound stage eliminates these problems by allowing the students to build their own sets. “It improves the environment the students are working in, which improves the quality of student films,” Professor Dunn says. It will also encourage students to grow in their abilities as filmmakers. “The sound stage forces students to grasp a new skill set,” says Professor Dunn. “They learn how to build sets for filming.”

The whole student body benefits from the sound stage. The sound stage is also be equipped with a projector and surround-sound stereo for the screening of films.

The sound stage helps students to become better filmmakers. It also gives them exposure to different facets of production. JP Catholic is growing rapidly, constantly striving to meet even the unspoken needs of its students.

Read about funding needs for the Sound Stage