With the proliferation of new media channels is changing the face of our culture, it's of the utmost importance for Catholics to jump in and use its vast potential for evangelization. That's what several JPCatholic students decided to do when they conceived of BUMP+, a scripted web reality show that followed three women in crisis pregnancy situations. Mollie O'Hare, a JPCatholic student producer and pro-life activist, had created several successful ads for a California pro-life ballot proposition during the 2008 election cycle. Seeing the potential and power of new media, O'Hare decided she wanted to take a different approach - she wanted to change hearts and minds through story and entertainment. Through her experience on the pro-life front lines as an active sidewalk counselor, she saw how logical pro-life argument rarely penetrates the ideology of the other side, and how the debate often devolves into mud slinging. Story, on the other hand, can pierce the barrier of ideology, through the power of empathy and drama. 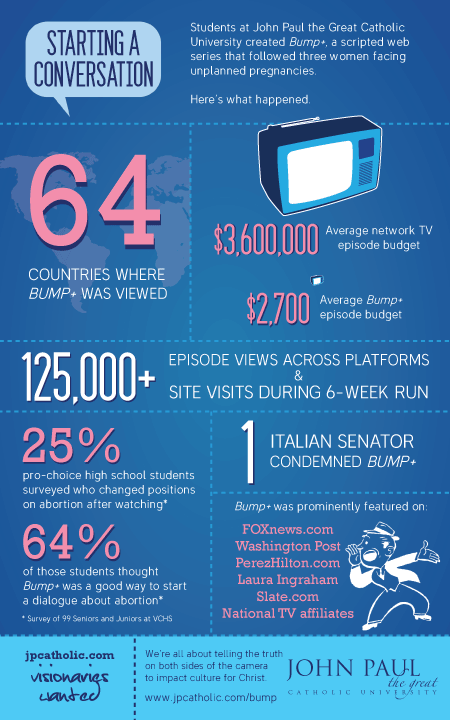 Aided by JPCatholic Provost Dominic Iocco, the idea started to take shape. The show would use the power of story to evangelize, and the web provided the ideal distribution channel. O'Hare and her team decided to leverage the internet's inherent interactivity. It provided the opportunity to create an authentic dialogue in the context of the stories being presented in the web TV show. With a rigorous commitment to only allowing real, charitable communication on the site, the team believed that the stories being presented would open up the opportunity for hearts to be changed through dialogue. The JPCatholic students saw the power in changing the debate, taking it from an abstract issue of the "right to choose" to a concrete issue of "what should these women in these particular circumstances do?" This question opened the door to women who had suffered greatly after their abortions to share their powerful witness. The new media revolution enabled the JPCatholic students to promote life in a way that was impossible 20 years ago.

Executing on the idea was a little intimidating, and the mentorship of JPCatholic's Provost Dominic Iocco, a successful entrepreneur in his own right, was vital. Working on a shoestring budget, the production team created a real doctors office and examination room in JPCatholic's soundstage. Hundreds of SAG actors and actresses were auditioned for the roles, the team stayed on target in launching their thirteen episodes beginning on January 22nd, the anniversary of Roe v. Wade. 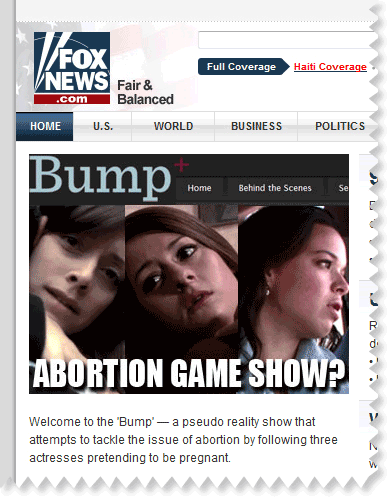 The show exceeded all expectations. It was featured prominently in The Washington Post, on Fox News's website, Perez Hilton's blog, Slate, Big Hollywood, and countless other media outlets. The series was picked up by local news stations, national radio shows, and it even made Italian and Russian news overseas. All said and done, BUMP+ was called the most talked-about web TV show ever produced. See the infographic on this page for more information. To watch BUMP+, head over to Bumptheshow.com. To learn more about JPCatholic's visionary film program, click here.